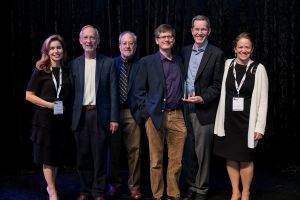 The award goes to Timothy Miller, MD, PhD, of Washington University School of Medicine, Don Cleveland, PhD, of the Ludwig Institute at the University of California at San Diego, Richard Smith, MD, of the Center of Neurological Study in La Jolla, California, Toby Ferguson, MD, of Biogen and Frank Bennett, PhD, of Ionis Pharmaceuticals. The team members received their award during the 2019 MND meeting in Perth, Australia on December 6, 2019 for their discovery and development of antisense oligonucleotide (ASO) technology as a treatments approach for SOD1 mediated ALS. This approach is also under development for other forms of ALS and other neurodegenerative disorders. The nominators and reviewers considered the development of ASO therapy in ALS as the most important new breakthrough in treatment. The recipients gave a talk discussing the history of developing this ASO approach for ALS conference.

The annual Healey Center International Prize for Innovation in ALS is a global award celebrating excellence in research for an individual or team that catalyzes exceptional discoveries leading to a transformative advance in therapy development in ALS, also known as Lou Gehrig’s disease.

The award selection committee consisting of members of Healey Center Science Advisory Committee reviewed nominations from several distinguished individuals and teams. In addition to the potential impact of this discovery for ALS treatment, the team also considered the much broader impact of the antisense technology for so many other neurological disorders including spinal muscular atrophy, Huntington’s disease, and sporadic forms of ALS.

“We performed the first antisense trial in any neurological disorder in people with SOD1 ALS. The participants and their families were pioneers to help bring forward this type of approach not just for familial ALS but for many neurological disorders.” said Merit Cudkowicz, MD, director of the Healey Center and chief of Department of Neurology at MGH.

“My vision for the Healey Center International Prize for Innovation is that it will recognize forward-thinking innovators to join the cause and find the cure. This inaugural award acknowledges the tremendous progress that this team has pioneered in bringing forward the first ASO therapy for this disease, and the transformative way they continue to contribute to the field of ALS,” said Sean M. Healey.

The Sean M. Healey Center International Prize for Innovation in ALS has been made possible through the generosity of Affiliated Manager Group, Inc. (AMG), the Healey family and friends. Sean M. Healey, executive chairman of AMG was diagnosed with ALS in May 2018. Following his diagnosis, he took a step back from his long-time role of chairman and CEO at AMG to pursue treatment and guidance from Cudkowicz, his physician. Together, with his company and friends, he established the Sean M. Healey & AMG Center for ALS at Mass General.

For more information about the Sean M. Healey and AMG Center for ALS, please visit the website.